I had just mentioned that I have been watching the documentary series, The World At War, and there were a few parts I was looking forward to watch. They were:
- The fight at the D-Day beaches
- The fight at Iwo Jima
- The fight for Berlin
- Speeches by Churchill
- The Fat Man & The Little Boy

Well, I am off to see the first for real in a few hours..! Not the fight, of course. The beaches. There were 5 beaches where the allied forces landed. They were code named Utah, Omaha, Gold, Juno and Sword. While the American forces landed at Utah & Omaha (duh!), the British and some Canadian forces landed at Gold, Juno and Sword. While the 5 landings together are called the D-Day landings (incidentally called Jour J in French), it is the fight at the Omaha beach that is the one people are speaking of when they talk of Normandy. It was the beach where the allied forces met the toughest resistance, it was described as the 2nd hell on earth, after Iwo Jima.

I will try and hit this Omaha stretch, it is where the famous WW II cemetery is present, the one which we all saw in Saving Private Ryan and countless other movies & news footages. Hope I manage to get to those places. Need to wake up in less than 4 hours to start the journey! Till then the famous photo, and the military map of the area..! The Omaha beach then 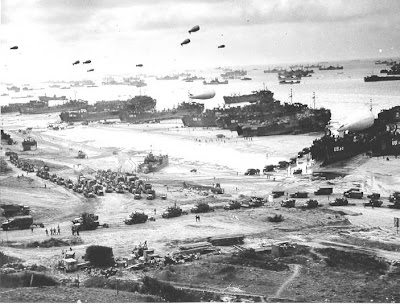 And a glorious picture of the beach now

And the war memorial on the beach

Will post my pics too (fingers crossed).
Labels: Normandy war