This is coming after almost a year, but was browsing through some pics right now and remembered that I hadn't really shared the vizag trip with many people. Hence, this post.

Now that I come to think of it, it is funny that each one of us has worked on some NLP technique or the other. It started off with John & Maddy doing their stint under Neelu. Then gauri, danny, Himanshu & I also followed them into this and our BTP came out of our work with Neeladri. And then Deepak and gauri also made something ( a synonymn finder...??) using LSA and all... Anyways, that is a huge digression.

So, Shampa sent our BTP as an entry to the ISTE National Convention of 2007 which was to be held in Rajam, some 200 kms off Vishakhapatnam. As it turned out our project did get nominated for the (pls don't laugh) Kerala Government National Award for the Best Engineering Design. We guys were definitely thrilled. After all, we had put in quite a lot of (genuine) effort into this project, but, much more importantly, we had thought of writing atleast one paper out of this project, but us being us, we never managed to do that. But here, something good was happening of its own accord, and all we had to do was to give it a little nudge. And then the words 'National' & 'Best Engineering Design' did send us in a state of frenzied excitement. So, we started our preparations. We were supposed to deliver a presentation & (possibly)a demo at the national convention that was being held at the GMR Institute of Technology, Rajam, which, as I said is a rather bucolic though very beautiful place a few hours away from Vishakhapatnam. Himanshu was unable to come for the event and unfortunately Danish caught chicken pox at the very last moment (on his birthday too..!!) 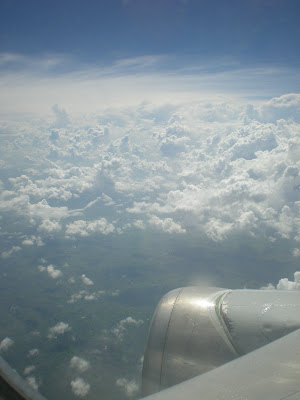 So, there we were, Gaurav and I. We boarded our flight ( a very antique looking Alliance Air behemoth ) to Vishakhapatnam, which is the nearest airport to Rajam. Non-airworthy it had looked from outside, but once we were inside our primary problem was the leg room...! It was ouch..! Cramped seats, pathetic service by the air hostesses, and useless food. But the view obviously compensated for everything..! By the time we landed at Vizag we had forgotten all about the seats and were ready to take on Vizag, explore it a bit and then head off to Rajam. Especially since Gaurav had spent much of his childhood here. But, lo & behold, what greeted us there was incessant rainfall. It was the starting of October and south India was caught amidst some really foul weather. But, insistent on enjoying our time, we tarried on nevertheless. We booked a taxi, had food and even managed to dash off (in a really torrential downpour) to a submarine that had been converted to a museum. Standing inside the submarine with the rain pounding us from all sides was really an experience that I wouldn't be forgetting in a hurry... :-) Thanx Gaurav for that one..! Well, after that we just went off to Rajam, it took us about 4 hours and that night we just went up to the rooms allocated to us, had food, made ourselves comfortable and slept. 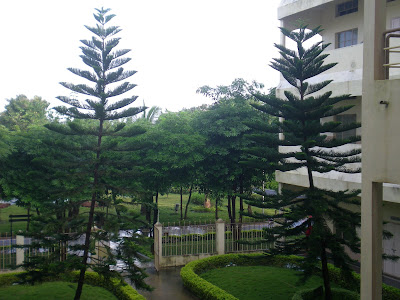 (Fast-forwarding the boring part... ;-) ) The next morning we went for our registeration, rehearsed our presentation, and gave it to a panel of 3 jurists in the evening. By the time everything was over, we were exhausted. Then we just roamed about the beautiful campus and marveled at everything that was so peculiarly south Indian. The trees, the food, the way everybody seemed to practically live off sambar-chawal or dahi-chawal and ate it the way I always prefer too, with their bare hands... Yummy..!! But the most astonishing thing we came across at that college was the immense amount of control that was exercised over the college students. These poor guys still have to wear uniforms..!! Their shoes were checked every morning and the defaulters were punished. This is college for God's sake...! I am no supporter of school uniforms and seeing this state of affairs in a college was really disheartening. All over the country, the girls hostels are usually locked up after around 9 at night. And well that is reasonable considering the kind of society we live in. But, here even the boys hostel was locked down after 8:30...! Strange.. very very strange..! Despite all this, our hosts did really make a big effort to make us feel comfortable. And I don't know why, but I got the feeling that they were somewhat intimidated by the fact that we had come all the way from Delhi and that too, by air..! 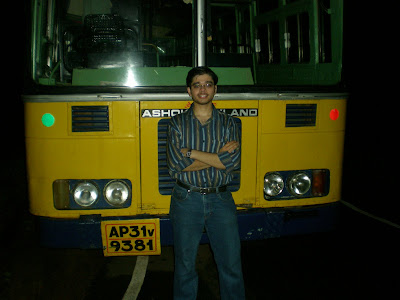 Nevertheless, rested and nourished and with the presentation done and over with, we had only two things on our mind. Firstly & obviously, whether we would get the first prize (which we did, eventually....! :-) ). And secondly, we had come to hear about the really bad weather at Vishakhapatnam, due to which all the flights to & from there were being canceled. And we had a flight to catch from Vishakhapatnam bound for Hyderabad, from where we were to catch our flight back to Delhi. And if the flights from Vizag were being canceled then we were almost certain to miss our second flight from Hyderabad. And seeing that the ISTE biggies (who had come from Delhi) were worried about the exact same thing, we decided to take a bus to Hyderabad at the earliest and catch our flight from there. 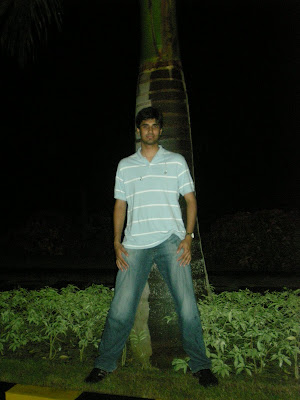 So that is what we did. We went from Rajam to Vizag by bus, and along the way witnessed some astonishing natural beauty, the likes of which I have rarely ever seen in my life...! What a pity that my camera (actually a friend's cam) was deep inside my bag, which I couldn't possibly unpack there. Well, then from Vizag, we took a bus to Hyderabad. On reaching Hyderabad, we went over to Gaurav's masi's place. They had a pair of immensely loveable Chihuahuas. After fooling with them to our heart;s content, we moved on to a whirlwind tour of Hyderabad ( we had only two hours before we had to rush off to catch our flight to Delhi). So we saw the Hussain Sagar lake, the Salar Jung Museum (regrettably, we couldn't find the Nizam's jewels. Would have loved to catch a glimpse of those...!!), and managed to catch a glance of the Char Minar from a little distance too... We could have gotten closer but we were caught in a traffic jam in what the cab driver explained to us to be the Chandni Chowk of Hyderabad. Disappointed, we gave up and turned back to the airport but not before we got some famous Hyderabad Biryani packed for us for the flight back home. Once on the flight, there really wasn't much to be done. We had some biryani, talked a bit, and fell asleep, and before we knew it, we were back home...!

It was a very interesting trip indeed, the most planned one I had ever gone on for sure, and as it turned out, was the most haphazard one indeed. And yeah, we later came to know that the flight from Vizag to Hyderabad, which we had thought would be cancelled, was the only flight that had taken off..!! So much for all our planning...!!
Labels: Hyderabad rain Rajam submarine vacation Vishakhapatnam