The Rape of Goa 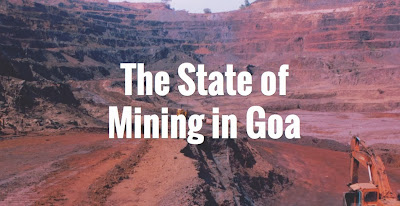 The following is a message posted by Claude Alvares on his facebook page following the interimn order of the Supreme Court in the ongoing Goa Mining Case, today, on 11th November, 2013.

Shows the depths to which the state govt is in cahoots with the mining companies who have been mining their asses off in Goa for decades now.

Read more on Claude's work as part of the Goa Foundation here.

WHAT THE GOA GOVT TRIED TO GET TODAY BUT DIDN'T

Some interesting indications of the significance of today's order of the Supreme Court on the Goa mining case are the following:

a) The Court disallowed the Monitoring Committee proposed by the Goa Govt and installed its own.

b) The Court rejected the public auction proposed by the Goa Govt and accepted the recommendation of the CEC and Prashant Bhushan that “E-auction” was the best route.

Several clues to what the Goa govt actually wanted are to be found in the affidavit it sought to file belatedly this afternoon. The affidavit is dated 9.11.2013 and is signed by the 32 year old Secretary (Mines) Mr Pawan Kumar Sain (who is so new to his posting he is not at all aware of what he is being made to sign). The affidavit achieved little because by the time it was sought to be presented to the Court, the Court had already commenced reading the operative parts of its interim order. In fact, the Court had already drafted its order when it assembled.

What did the now worthless affidavit disclose?

First, 15 of the 22 paras of the affidavit set out the proposal of the State Govt to keep the job of disposing off the stacked ore by itself through its own Monitoring Committee (MC). The State Govt's MC comprised Principal Secretary (Transport) as Chairman; Secretary (Mines), member; Chairman of the Goa Pollution Control Board, member; DIG Police (in charge of SIT), member, an environmentalist (to be appointed by the state govt) and the Director of Mines & Geology, as member secretary. The affidavit stated the State Govt had already taken a decision on the MC and it was now placing the said decision of the State Govt. before the Court.

The affidavit proposed this MC would take charge of the ore already mined and lying at mine-heads, stockyards, processing plants and jetties.

The affidavit then informed the Court that this 11.56 + 1.22 + 2.65 million tonnes would be sold by public auction which would be allowed to only those persons registered under Rule 45 of the Mineral Concession and Development Rules, 1988. (It does not take much to discover that a total of 47 persons have been so registered and they include all the persons involved in illegal mining in the State. Thus the auction would be fixed and the ore would remain with the illegal miners.)

The CEC objected. It said in Karnataka it found that e-auction got better price for the ore and the same should be done here as well. Prashant Bhushan also demanded e-auction. This would take the auction to a large number of persons interested and what is more, would be transparent as well.

The State in its affidavit said that all the money from all the ore it would auction through its MC would be retained by the State Govt., “as the ore lying at the site since 2007 upon expiry of the leases belongs to the state of Goa until such time the State Government decides on the Second Renewal Application pending with the State Govt.”

In its haste to file the affidavit, the State forgot that second renewals are only prospective and not retrospective, therefore it is highly unlikely that any of that money would ever be repatriated to the lease holders.

The value of the 11.56 million tonnes of ore the State Govt declared on October 31 is approximately 6,600 crores at the rate of $100 per tonne. The value of 15.46 million tonnes will take the cash in the exchequer to approximately Rs.10,000 crores. If the Goa govt reserves all mining leases to itself and mines just 10 million tonnes every year through registered and competent agents – as it is proposes to do with the coal block allotted to it in Chattisgarh – it can raise its entire annual budget from just this one single item. Goans need not pay taxes for at least 100 years. But from the affidavit filed today, it still looks quite obvious that the State of Goa would rather still want all the cash from the sale of its natural wealth to go to the mining companies instead of it being reserved for the welfare of the people of the State.


A day by day account of the case can be found here.
Labels: development Goa Goa Foundation mining Supreme Court