The Rape of Rosia Montana 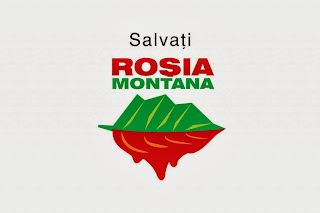 Rosia Montana is a beautiful, pristine area in the heart of the Transylvanian mountains. It's a rich area in terms of its ecosystem (and a well known destination for hiking and camping), its cultural heritage (hosting Roman ruins), and the flourishing local community of small scale local mountain farmers that continue ancestral traditions. Their produce, agricultural and animal in origin, is prized in Romanian markets for their quality and truly organic farming methods.

These mountains, some of the oldest in Europe, are extremely rich in precious metals, from gold to titanium. Some of the Roman ruins are ancient extraction galleries. In 1995, in obscure agreements, the Romanian government auctioned Rosia Montana to an equally shady Romanian-Canadian corporation called Gabriel Resources, who got involved under the name of Rosia Montana Gold Corporation. Since then and up to now, RMGC has not been able to start mining in the region, because the proposed project never complied to EU regulations. Not to mention that its dealings with the government have always lacked transparency.

If the project is actually approved, it will lead to a social and environmental disaster. First, people who live there have to be relocated. Then RMGC wants to dynamite four mountains in order to create an 8 square km area of extraction (an area that will look like a toxic desert). The amount of cyanide to be used is more than ten times the total amount of cyanide used in all mines of Europe combined. There will be a LAKE of cyanide enclosed in a barrage that's supposed to last for ever and until the end of time. The National Romanian Geological Institute analyzed the proposed project, and declared it an ecological time bomb and even economically unprofitable, because the methods of extraction are so rudimentary that many precious methods will be lost in extraction. Cyanide will surely leak (RMGC is investing little to nothing in proper methods of containing the cyanide).

There are antecedents. There was a disastrous Baia Mare city cyanide spill in 2000, the largest environment disaster in the area after Chernobyl. The cyanide reached the Danube and the Black Sea, poisoning large part of Eastern Europe. The Baia Mare mine is on a much smaller scale than the proposed Rosia Montana. Stopping the mining project at Rosia Montana is not only for the interest of Romania, but for the protection of neighboring countries, and Europe at large. Cyanide mining is illegal in a number of EU states.

Of course, the local community is the one immediately at risk. My grandfather lives in the countryside 50 km away from Rosia Montana. He tells me all small agricultural businesses and local farmers are afraid nobody will buy their products because they will be contaminated. Nobody from Romania of the EU will buy products close from a cyanide mine. My grandfather, like the rest of the community, drinks pure, clear, fresh water from mountain springs. They are all in danger of contamination.

Here is a basic illustration of the facts from Rosia Montana: http://imgur.com/9HvoTH3&E4YLV5N

Since the 1990s RMGC has been stymied by Romanian and European environmental legislation (Rosia Montana is proposed to be included in the Unesco World Heritage) , NGOs, local communities in Rosia Montana, and popular resistance against the project. Despite the obvious disadvantages of the project, and the almost unanimous vociferous resistance of civil society against the project (even though RMGC invested millions of dollars in marketing campaigns and bought off virtually whole newspapers and TV stations), in August 2013 the Parliament received a draft legal package that would push through the mining project at Rosia Montana. The law project, especially designed for RMGC is made in order to bypass all the points of its illegality.

Since then, there have been massive popular protests across Romania, biggest ones since the '89 Revolution (with the difference that now they are peaceful). It's happening in the big cities, and it's happening in peasant communities. It's one issue on which all classes and all ages of Romanians agree on. For two weeks the protests haven't been covered in Romania media at all, until there were so many people it couldn't be ignored (also people gathered in front of the national television headquarters in Bucharest demanding a voice).

This is a giant case of corruption, where a handful of people would like to get rich at the expense of the health and well being of the population, and where corporations dictate a legislation that's supposed to allow then to irresponsibly and recklessly exploit natural resources. It is theft and crime at the largest scale, and it is illegal. A mine of such scale in such a heavily populated area is unprecedented.

I found these articles to speak eloquently on economic, legal, and political aspects of the matter:

This is a Canadian reportage from a site of protest:
http://www.youtube.com/watch?v=y89oSum59BY

And lastly, this is an evocative documentary about a similar, but on a much smaller scale cyanide mining project in Transylvanian mountains. It's useful to get an idea of what kind of place we are talking about, and what it's in danger of becoming (only much worse):

Thank you for getting to the end of my efforts to explain the current situation at Rosia Montana.