Now, I just stumbled upon this some time back. Very interesting to say the least..

Researchers at Akishima Laboratories (Mitsui Zosen), working in conjunction with professor Shigeru Naito of Osaka University, have developed a device that uses waves to draw text and pictures on the surface of water. 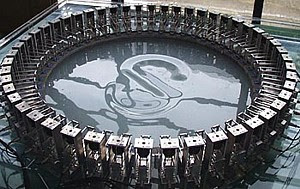 The device, called AMOEBA (Advanced Multiple Organized Experimental Basin), consists of 50 water wave generators encircling a cylindrical tank 1.6 meters in diameter and 30 cm deep (about the size of a backyard kiddie pool). The wave generators move up and down in controlled motions to simultaneously produce a number of cylindrical waves that act as pixels. The pixels, which measure 10 cm in diameter and 4 cm in height, are combined to form lines and shapes. AMOEBA is capable of spelling out the entire roman alphabet, as well as some simple kanji characters. Each letter or picture remains on the water surface only for a moment, but they can be produced in succession on the surface every 3 seconds.

Researchers at Akishima Laboratories have developed similar devices in the past that used waves to draw pictures on the surface of water, but those devices had trouble producing letters with straight lines (such as the letter K). Additionally, it took the previous devices up to 15 minutes of data input time to produce each letter.

The newly developed technology uses improved calculation methods for controlling the wave generators, relying on formulas known as Bessel functions. In addition to being able to draw letters consisting of straight lines, the input time has been drastically reduced to between 15 and 30 seconds for each letter.

Akishima Laboratories expects the technology to be incorporated into amusement devices that combine acoustics, lighting and fountain technology, which they hope to see installed at theme parks and hotels.