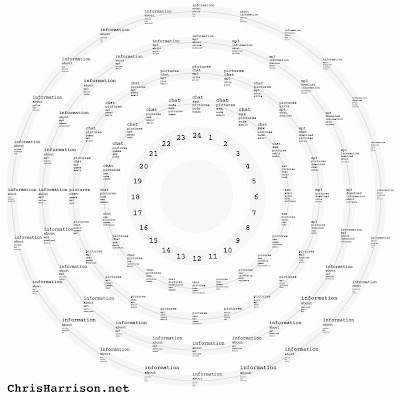 This is the product of a research undertaken to study the baisc human usage over the net. The image is a 24-hour clock showing what people look for at different times of the day. The font size is proportional to the no. of times the term appears in an hour.. This data was collated from over 1997-2000 with the innermost ring representing 1997.

Some very interesting observations can be made:

* There appears to be a dramatic shift away from chat and towards information retrieval between 1997 and 2000.
* People are diurnal - search activity dies down at night and picks up again as people get up for work.

* It is clear that chat is most prevalent when people are home (evening). You can see chat frequency starting to grow around 11am, dominating by 5pm, and tapering off around 1am. It is supplanted by sex around 5am.
* It seems people are curious about adult topics throughout the day. You can see sex jump in frequency around 11pm, reaching a climax around 2am (no pun intended) and dying down to nominal levels by 5am. However, since everyone is in bed, it clings to the top spot until pictures jumps to life, snatching the top spot as people roll out of bed.
* Secondary terms are interesting as well. Entertainment oriented terms are popular in the afternoon and evening. University and software make their main appearance during the work day (8am-5pm). Warez makes it into the top five from 5am-7am thanks to late-night pirates and people who can’t get to sleep.

* Chat and pictures vie for the top spot starting around 5pm, continuing until 2am. However, mp3s (and download) make a strong appearance, especially at night.